#OccupyWalk | The 99% will march across America to promote social and economic justice on February 11th!

Comments Off on #OccupyWalk | The 99% will march across America to promote social and economic justice on February 11th! Posted by vreedwrites on January 25, 2012

What a brilliant idea! Hats off to #OccupyWalk. As a long time fan of Peter & Barbara Jenkins, authors of A Walk Across America I am envious of these adventurous Occupiers. Wish I could go with them and maybe I will join them when they near the Mid-West.

All you Retweet Jammers out there, follow them #OccupyWalk. You know I will.

#OccupyWalk | The 99% will march across America to promote social and economic justice on February 11th!.

The Stop Online Piracy Act may not benefit from White House life-support; however the Senate Protect IP Act still lives. The White House issues a lukewarm statement earlier, find it on Mashable.com.

Anticipating #J18 anti-SOPA #OpBlackout, this site is going dark while we revise graphics for other projects. We invite you to refresh your beverage and enjoy this informational spot, the excellent work of OccupyYourCongress.info, #J17.

1st collector for OccupyYourCongress.info
Follow my videos on vodpod

Follow-Up: Three reasons why I do not occupy

Comments Off on Follow-Up: Three reasons why I do not occupy Posted by vreedwrites on January 5, 2012

Two weeks ago I wrote an article giving reasons why I was sympathetic and supportive of the Occupy movement. Today, I will give my reasons why I do not Occupy.

Independent Journalist: every time one adds or changes roles in life, there are a host of terms and conditions, traditions and expectations. In the case of  written reporting and to a certain extent image choices, one must either write straight news or choose to be and Opinion/Editorial columnist. This traditional position has been bucked by well established bloggers for a decade. I take a position similar to Tim Pool’s. Pool readily admits bias in sympathy with the Occupy movement. I too am sympathetic; however I am interested in covering a broader viewpoint. I was an anthropology student, the study of human culture, in all it’s messy glory fascinates me. I try to keep history, culture and communication in mind while I report on the revolution.

Following closely on the heels of independence; autonomy, as  former media working group members of local occupations are discovering. Eventually one way or another, your wings will be clipped or your time will be grossly and needlessly wasted. This has happened with Occupy Wall Street media several times; it has happened to me.

The twin gifts of independence and autonomy allow me to make decisions about how best to cover events or actions. Without autonomy, opportunities would have been lost to amplify the message, to engage on a state-wide and national platform. And most certainly to develop relationships.

The third reason I do not occupy is purely pragmatic. The local occupation is very small, campers inhabit two tents. Ostensibly one designated for men, the other for women. I have never stayed overnight; therefore I do not know if that is a hard and fast tradition. For me, continuous occupation is functionally not practical. I would not be comfortable leaving my equipment unsecured for any length of time. Additionally, I have a couple of arthritic issues which make standing or sitting in one place for any length of time, problematic.

On the other hand, not having spent time as a camping occupier has deprived me of experiential knowledge and insight. That is a condition I intend to remedy eventually, if law enforcement does not make it physically impossible to camp on private property.

Finally, there have been some disappointing controversies within the independent media covering Occupy at large whether for their own local occupation or another city.  The history books will remember these incidents as a tempest in a teapot, or growing pains as long as the corpus of new media journalists learn their lessons fast.

I would like to add a caution to everyone considering reporting in the field at direct actions, protests, guerrilla theater and marches.  Plan very carefully. Distance yourself from anyone who is in a verbal confrontation with law enforcement. Watch your back, go in pairs. Journalists from main stream media and independents both have been targeted and arrested. Know your limits. “Survive to report another day.”

Meme: IOccupyBecause and 7 ways you can too During  Thanksgiving week a twitter hashtag popped up entitled #IOccupyBecause. This hashtag has since blossomed into a meme. Traffic for the hashtag itself has slowed down and morphed into #WhyIOccupy; however it can still be seen popping up from time to time. The question is, why do you Occupy? Here is my answer in long-form.

(Luke 19:13). The king calls ten of his servants together and gives them each ten minas. Then he instructs them: “Occupy until I return.”

The word occupy in the Greek is pragmateuomai. To busy ones self in trade or banking, to increase or be fruitful.

I was involved in a conversation recently where the subject was a married woman who owned a restaurant and was in deep financial trouble due in part to spouse loss of job and interestingly, a $5 million dollar house they had purchased. Was a house that grand really necessary for two working professionals?  What if they had purchased a $1 million dollar house? $4 million dollars to spare is a lot of dough. That sum might have kept the restaurant open during the financial crisis, saving the jobs of the restaurant employees. The restaurant did re-open according to the teller of the tale but at what cost to the employees?

What about a college education? According to a USNews website article published in 2010, “The average annual tuition (plus expenses) at a private nonprofit four-year college is about $35,000.” So simple math again, 32 people could receive a four year degree. How many were employed by that restaurant again?  The teller of the tale did not know. The restaurant owner did reopen, eventually and the spouse was again employed at some point. This is an understandable example of inequity, Wall Street corporate and mortgage company bonus scales are beyond description.

Zuccotti Park, OccupyPortland, Occupy Seattle, OccupyUCDavis, OccupyLA are all examples of law enforcement brutality. Each is linked to coverage, decide for yourself if you have not paid attention to those pesky protesters, yet.

I do not stand on a corner or march, I am usually photographing and of course I write. So, if you are not occupying yourself  or you are wondering what you can do to help restore social justice and create a more equitable society we have the following suggestions:

Last night, on his MSNBC show, Ed Schulz finished the evening with a piece about the Emergency Manager issue in Michigan. One particularly interesting point made by Rev. Alexander Bullock from the Greater St. Matthew Baptist Church of Highland Park, MI and also of Rainbow Push Detroit was that Emergency Managers can take control of the Clerk’s office when they take over a city. Since the City Clerks run the local elections, that has ominous portent for the future of democracy in our state. During the hand-off from Ed Schultz to Rachel Maddow, it became clear that there was much more to come on the subject of Michigan’s Emergency Managers and indeed there was.
Via bloggingformichigan.com

the DNA of a City

Comments Off on the DNA of a City Posted by vreedwrites on December 8, 2011

the DNA of a City. by analogmutant caught my attention this morning. The descriptions of a journey in time attached to everyday objects, long abandoned by the owner and forgotten by the rest of us, piqued the anthropologist in me. The poignant reflections of the past reminded me why I study anthropology. Worth the read for anyone who has mucked around in the backyard and discovered a mystery.

3 Comments Posted by vreedwrites on December 7, 2011

A significant blow for independent journalists, phototgraphers and videographers; moreover an outrage against those struggling to amass a portfolio worthy of showing to main stream media.  It will be interesting to see if any main stream media come to her defense and shame on any who do not.

Mashable reported today that blogger Crystal Cox is not due any protection in a lawsuit filed by Obsidian Finance Group because she is not “affiliated with any newspaper, magazine, periodical, book, pamphlet, news service, wire service, news or feature syndicate, broadcast station or network, or cable television system.” Read the story, caveat emptor.

2 Comments Posted by vreedwrites on December 6, 2011

Occupy Grand Rapids will be televised.m4v

Comments Off on Occupy Grand Rapids will be televised.m4v Posted by vreedwrites on December 6, 2011 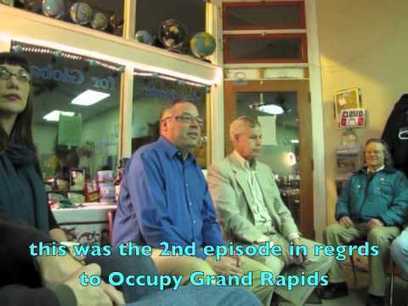 Occupy Grand Rapids utilizes every available community based media resource they can access. A short vid of them on 2 local TV shows in December 2011.
Via www.youtube.com 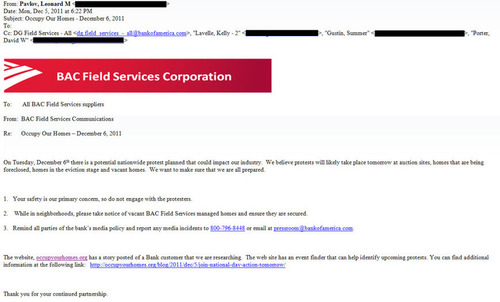 Internal memo from Bank of America to their field offices and field representatives.
Via occupygr.wordpress.com