Comments Off on Today’s Bread and Butter Posted by vreedwrites on November 28, 2011

If this is not a money shot, I do not know what is. I happened by the OccupyGR homebase to see if anyone needed a shift-change; lo & behold there is today’s bread & butter!

Shop Local, all day, every day, a photo by vreedwrites on Flickr.

This sign can be seen on the window of a mom & pop on Monroe Center. The owners are very friendly and were the local grocery for the disabled former residents of Morton House apartments around the corner. To be sure their business was affected by the closure of Morton House. Show them some local Grand Rapids love by stopping in from time to time.
Thanks to them for their kindness to their patrons.
Photo# localMonroeC1

OccupyGR has developed a counter-strategy  for Black Friday and overspending in general. They run a Really, Really Free Market every Saturday in their public protest location Monument Park at Fulton & Division in Grand Rapids MI.

In addition to the Really, Really, Free Market, OccupyGR is joining forces with The Bloom Collective on Black Friday to host two locations for Buy Nothing Day free markets. The Bloom is also showing the film  “What Would Jesus Buy?” at 2:30 pm, OccupyGR encourages you to visit and see the film then visit OccupyGr at Monument Park. [The Bloom Collective event on FB]

We hope these two events bring a smile to your mug and put cheer in your heart.

Happy New Year  . . . from vreedwrites and our friends!

OccupyGR: Protests Condoleeza Rice 11.16.2011, a photo by vreedwrites on Flickr.

Comments Off on Message from an occupier | Facebook Posted by vreedwrites on November 9, 2011 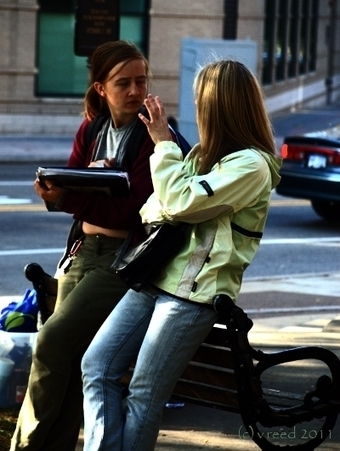 “Occupy Grand Rapids: Message from an occupier. Hi! I’m a Grand Rapids Occupier. I also go to school at GRCC and work part time for a catering company. I wanted to take some time to share some of my thoughts on the movement. This movement takes ALL kinds. I know not everyone can come sleep on the church steps with us or stand with us. But we do hope you try to come out when you can. I especially feel the Saturday Rally’s are most important, but in order to maintain a consistent presence people are needed at all times of the week for any amount of time . . .” One of our own has written from her perspective on the inside, a must read!
Via www.facebook.com

Comments Off on OccupyGR Approaches One Month Anniversary Posted by vreedwrites on October 31, 2011

The Grand Rapids version of Occupy-something or somewhere is approaching their one month anniversary.  The actual date may be a bit of a moving target; therefore the simplest way to mark that day is to use the date of the first General Assembly. Saturday October 8, 2011 was the first time Occupy Grand Rapids met as an associated group.

Much dialogue and preliminary work was accomplished that weekend. Monday October 10th before sundown, the Grand Rapids Police department visited OccupyGR in Ah-Nab Awen park next to Gerald R. Ford Museum. The GRPD visit was to warn camping Occupiers they were breaking the “sundown ordinance.” It was necessary to break camp and vacate the park, shortly. The OccupyGR campers disbursed without incident.

With an International event coming up, OccupyGR did not let any grass grow under their feet. The following weekend they joined Occupiers across the world in and International Occupy Day of solidarity. OccupyGR relocated to Fulton & Division, Monument Park. This site is across from GRPD, a fact most Occupiers believe works in their favor.

Here in Grand Rapids Ruthie the Country Fresh Dairy mascot was spotted making her way north on Division that afternoon. Presumably she was on her way to or from work.
Ruthie could not be reached for comment on the OccupyGr protest.

Organization efforts at the GAs continued every day at 6:00 pm in Monument park in an effort to come to consensus on OccupyGR complaints and solutions. The press and public found it difficult to nail down what the Occupiers are mad about, what they want to accomplish, and who exactly speaks for the group as a whole on any given subject.

OccupyGR also sees these facts as a positive. Each Occupier has a unique set of circumstances motivating him/or her to action and speaks for her/himself. Many are students of traditional college age, a few are non-traditional college students; all of that group express concern about their ability to complete their degrees because of financial concerns.

Some are working people, professionals and skilled workers who wonder if their jobs are secure. Some are retired and have life experiences stretching back to the previous protest era of the late ’60s and ’70s. Of these, a few lend their wisdom and life experience to OccupyGR freely. These are viewd as the Elder Statesmen and Stateswomen of OccupyGR. Still others are labeled “life-long activists,” having worked on one social justice issue or another their whole lives while raising families and holding down jobs.

There is a “silent” contingent among the population of greater Grand Rapids. These may be among the many who drive by Fulton & Division every day, honking as they drive by, on their way to fulfill the obligations and responsibilities of their own lives. OccupyGr occasionally hears their opinion as well. It usually runs along the lines of “the information available is confusing, or we could not find information.”

Additionally there is another impression expressed recently by a visitor to OccupyGR during a Saturday event. “Your image is heavy and anarchist, dark and confusing. If you can figure out a way to get past that, many of us would support you” the visitor commented. When pressed with the question “You are asking us to modify our image, to lighten it up then?” the response from the visitor was “Yes!” This discussion continued with a request to include more artists, musicians, actors, photographers, videographers and writers.

OccupyGr held an Outreach and Teach rally October 22, 2011, participated in a private dialogue with Mayor Hartwell and James Wallis at Fountain Street Church as well as visiting the City Commission meeting as invited guests of Councilwoman Ruth Kelly and Mayor George Hartwell.

The Occupy movement at large receives much criticism, OccupyGr receives it’s share as well. The new favorite is the sly observation that the Michigan winter will do the group in as the numbers of Occupiers at the corner of Fulton and Division dwindles daily. OccupyGr members are well aware of this criticism. They have taken measures well in advance of their critics to form work groups tasked with finding various solutions to weather problems from a building for storage and meetings to ad hoc instruction on proper cold-weather dress and the signs of hypothermia.

It remains to be seen if this group, characterized as “peaceful and cooperative” by their own GRPD, will coalesce and come to consensus on the challenges they face. However, do not make the mistake of marginalizing these folks; quite possibly the one thing they all agree upon apart from peaceable assembly is that they will not tolerate marginalization by anyone, ever again.